Overview of the Artificial Intelligence Industry in Ireland

I use the phrase ‘Artificial Intelligence’ as an umbrella term to categorise the industry. I debated whether this should be A.I. and Machine Learning and about 10 other derivatives. However, A.I. makes sense for now given the size of the Irish market. There is a huge amount of cross over between A.I. and big data. I had to draw a line to define the market. To that end, companies that made it onto the landscape map use A.I. as the key differentiator for their technology.

The first iteration of the Irish A.I. landscape map is made up of 19 companies (legal entities). As I write this post I am seeing other companies emerging that I will include in the next version of the map. Despite the small size of the industry, it’s possible to break the market out into 4 categories: apps, computer vision, robotics and hardware and labs. You can see the definition of the categories in the landscape blog. As the market matures I will introduce other categories like natural language processing, deep learning, speech recognition and machine learning… and whatever else emerges!

Why write this blog? A.I. is really interesting because it is set to transform society way beyond what we can imagine. The Irish economy is producing some really interesting companies in this space. Beyond Ireland at a global level we can expect to see a huge surge in A.I. driven applications between now and 2030 as Moore's Law continues to drive growth. The changes will be so profound that this new technology renaissance is being referred to as the fourth industrial revolution by the World Economic Forum. Over the next few decades we can expect to see a symbiosis between digital, physical and biological systems. We can start to think beyond a world of pizza delivery drones, self-driving cars and virtual assistants.

According to IDC the global A.I. market will grow to over $9bn by 2019 growing at a rate of 15% CAGR. The artificial intelligence landscape in Ireland is small but vibrant.  We can see in the graph below the companies have continued to enter the market over the past 15 years. 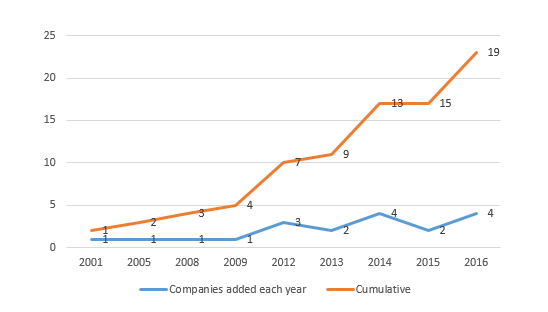 79% of the companies included in the landscape have come on the scene since 2012. Total cumulative Twitter followers for the 19 companies on the map is just 16,985, which is small compared to other Irish enterprises like Ryanair at 256k. In terms of job creation, LinkedIn has accredited 352 people in employment at these companies. Unsurprisingly nearly all of the businesses in the landscape are B2B, with the exception of 1 B2C. Given the outward looking nature of the Irish economy the companies themselves are all export oriented. The majority of companies have benefited from support (grants, funding etc.) from Irish State agencies such as the IDA and Enterprise Ireland. As well as entrants to the market, there has been at least 1 notable exit in recent years – Movidius, the computer vision chip maker, which was sold to Intel for €322mn.

There have been a number of notable investments in the industry over the past few years. Aylien, the NLP and machine learning start-up received 5 rounds of investment amounting to $1.1mn. The most recent round of €580k coming from SOSV and Enterprise Ireland.  Heystaks, the A.I. driven analytics platform, has also seen multiple rounds since 2010, the latest tranche of €1.5mn coming from Denis O’Brien’s Digicel. Nuritas, the biotechnology company, is also leading the funding charge. In 2015, New Protein Capital secured €3.2mn in funding for Nuritas. And in 2016, the Irish biotech received a further €2mn from California based Efficient Capacity.  However, the quantum of investment is low when compared to Irish software companies like Fenergo, which received $85mn in 2015.

Thinking of entering the A.I. market? Besides having a good idea, the main barrier to entry is knowledge and domain expertise. Anyone with an understanding of A.I. algorithms and the ability to code can start building A.I. applications - most Irish computer science and ICT graduates should find themselves on a decent technical footing to enter the market for example. However, the majority of landscape companies employ large numbers of heavy weight Phds and post docs giving them deep domain expertise and a strong competitive position. A.I. is a frontier industry so threats of substitutes remain high. If the user doesn’t fancy using a voice activated solution like Siri, they can always use old fashioned search. Don’t fancy using a driverless car? Then drive yourself and the list goes on! Despite this, A.I. entrepreneurs with decent platforms are well equipped to maintain first mover advantage in their category which will allow them to secure a dominant position and consumer mindshare. So is all of this good for the consumer? Well at present the choice for consumers is limited given the size of the market. At a global market level, there are substitutes in virtually every category on the Irish landscape. The fact that there is a market for A.I. products and services will continue to attract entrants as the industry moves through its lifecycle.

Support for the A.I. ecosystem

According to Enterprise Ireland, Ireland is the second largest exporter of computer and IT services it the world and accounts for €50bn of exports each year. The A.I. ecosystem is surrounded by a strong blue chip technology hub with vested interests in A.I. and machine learning. Companies like Google, Apple, Salesforce and Facebook have their EMEA HQs in Ireland. In fact, Google recently bought two Trinity College virtual reality spin outs Thrive and Tilt Brush in 2015. The ripple effect of the Irish tech scene bodes wells for the A.I. industry. Overseas tech companies are drawn to Ireland for its well-educated, English speaking workforce… and a competitive corporate tax rate of course! Beyond the big blue chip companies, Ireland is home to a well-established academic research community. All of the major Universities in Ireland have A.I. research groups, including Trinity College Dublin, University College Dublin, and Ulster University. Academic research is bolstered by other industry associations and research houses like the Artificial Intelligence Association of Ireland and Insight, which is one of Europe’s largest data analytics research organisations in Europe.

Whilst Ireland benefits from a buoyant tech scene and supportive ecosystem, what does the economy looks like? Like most of the Western world, the Irish socio-economic landscape remains colourful.  The general election in February 2016 saw the introduction of a highly fragmented minority government. In May, Ireland’s closest neighbour the United Kingdom voted to leave the EU. The UK is one of Ireland’s biggest trading partners. The devaluation of the British pound as a result of Brexit will make A.I. imports into the UK more expensive. Despite the recent turbulence, the Irish economy is still the fastest growing in Europe with a GDP growth rate of 4.9% compared to an average growth rate of 1.7% in Europe.

As I mentioned earlier, the largest barrier to entry is knowledge and domain expertise so talent is the key battle ground for the industry. Finding good developers, let alone Phds in the A.I. field, is an ongoing issue for Irish software houses. Many indigenous software companies leverage near shore and off shore development centres to source talent. Competition in the labour market is reflected in the employment rate which fell to 7.9% in September 2016, down from 14%+ at the height of the recession. A.I. start-ups need to compete with large multi-nationals moving to Ireland. For example Deutsche bank recently opened a new data lab called ‘The Hive’ in Dublin and says it will create 165 jobs in the coming year.

Overall, The Irish A.I. landscape is well positioned to play a key role in the growth of the industry. The company creation trend indicates that the landscape will continue to grow as new entrants find opportunities in the market. The tech ecosystem is very supportive, however access to talent and capital will remain a challenge for those solely focused on Irish sources.

*The goal of this blog is to shine a light on the Artificial Intelligence industry in Ireland. I would be delighted to hear feedback. Please send it to info@rorygalvin.com

Disclaimer: These views are entirely own.